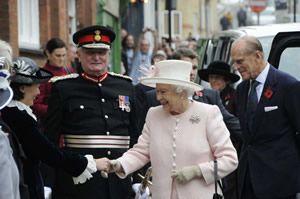 Her Majesty The Queen and His Royal Highness Prince Philip, visited Margate on Friday 11th November, they were greeted by large crowds wherever they went. The tour began in Margate Old Town, where they visited a number of businesses which had recently opened as part of the Thanet District Council’s regeneration plan for Margate, and met a number of veteran servicemen.

The Royal Party went on to tour the Turner Contemporary Gallery followed by a reception and luncheon in the Foyle Gallery. Following lunch The Queen and Prince Philip went on to tour the Margate RNLI Lifeboat station and to meet members of the crew and their families.