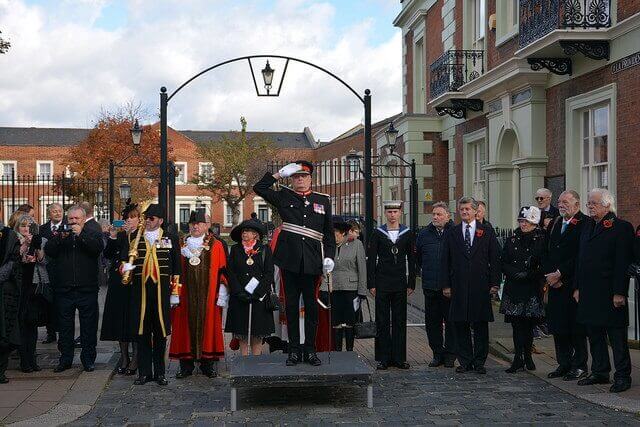 The Lord-Lieutenant and Peter Blackwell DL were in attendance at two of the many Remembrance Sunday Services held throughout the County on 12th November.

The Lord-Lieutenant attended the Remembrance Sunday Service held at Rochester Cathedral, before attending the wreath-laying ceremony at the Cenotaph in the High Street and taking the Salute at the March-past.

The Lord-Lieutenant taking the salute at the Rochester Remembrance Parade. (c) Symon Lock

Peter Blackwell DL represented the Lord-Lieutenant at the Remembrance Sunday Service held in Tunbridge Wells, where a record number of people gathered around the War Memorial to honour the memory of the men and women who have given their lives for our country. The parade included the Royal British Legion, 579 Field Squadron, the Royal Air Forces Association, the Freemasons, many Cadet Units, Scouts, Girl Guides and nursery-school aged children.

Attendees at the service  in front of the War Memorial. (c) John De Lucy