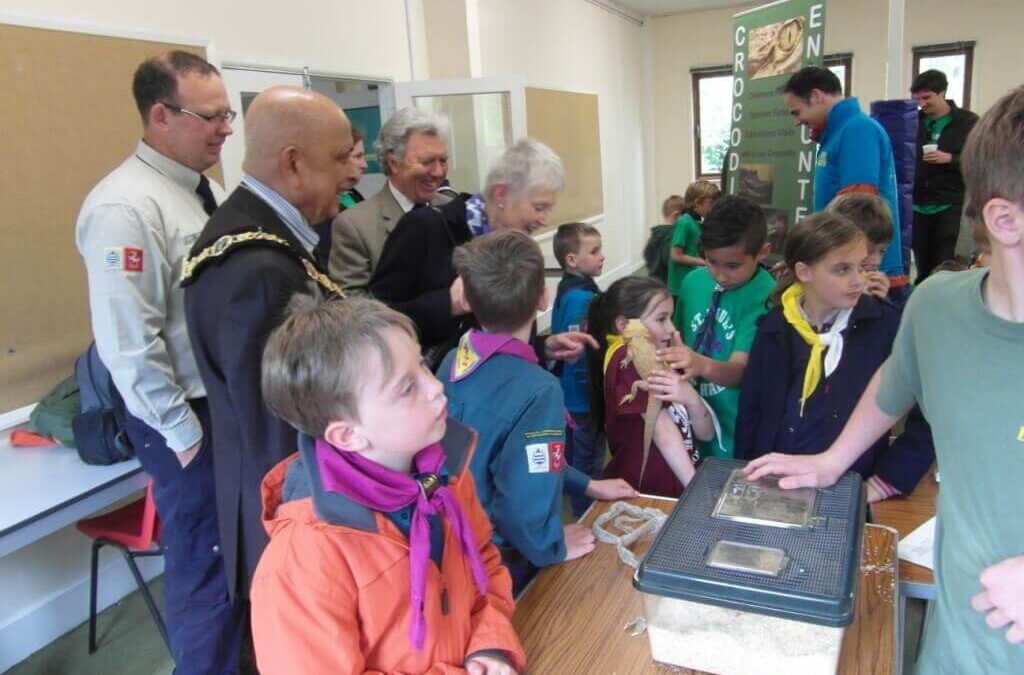 Peter Blackwell JP DL accompanied the Mayor of Tunbridge Wells, Cllr Ronen Basu and the Mayoress, Sue Basu, in an inspection of over 500 Scouts and Cubs at the St George’s Day Celebration held at the Scout Activity Field, at Adamswell, near Langton Green. They were accompanied around the site by the District Commissioner Mr Brian Hobden.

The young people who attended the event from the Tunbridge Wells District, thoroughly enjoyed themselves, helped by over a 100 Adult Leaders.

They were able to challenge themselves to a wide variety of experiences, including a trip down an ariel zip wire, launching a rocket, cooking twists, staying on the back of a bronco cow (if possible), using a set of large trampolines, laser shooting and additionally, handling a variety of reptiles.

Some of the Scouts and Cubs were eager to handle the reptiles, including several snakes, a large tortoise and a very small “dragon” (appropriate for a St George’s Day event), known more commonly as a Chameleon!

All the Scouts arrived at the Field aboard a service train operated by the Spa Valley Railway from Tunbridge Wells West Station to High Rocks Halt.  After renewing their Scout Promise at 5pm surrounding the Union Flag, they left for home using a special train back to Tunbridge Wells.  The highest ever recorded number of passengers alighting at High Rocks Halt from one train, will now be a feature of the history of the Spa Valley Railway.

District Commissioner Brian Hobden informed Peter, that all the Scout Groups in Tunbridge Wells have a waiting list for both boys and girls who are anxious to become Scouts. There are he said, “over 200 youngsters on the waiting lists.  We must find more adults to volunteer to become Leaders”. Peter reports that all of the Leaders he spoke to, were enjoying the day as much as the young people.  For more photos of the event and information about the Scouts in Tunbridge Wells, visit  www.tunbridgewellsscouts.org.uk